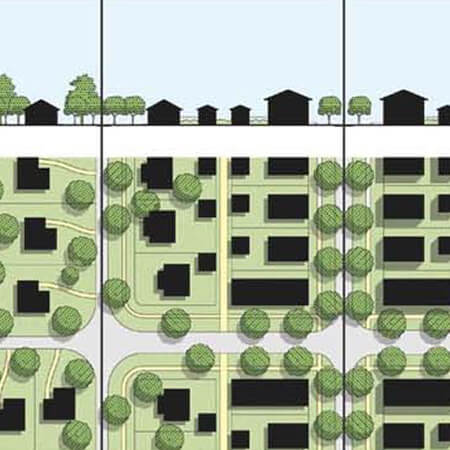 We produce Form-Based Code (FBC) as design implementation and regulation tools for cities and private developments. FBC, a coding technique established in past decades, is gradually replacing the Euclidean land-use-based planning codes that prevailed throughout the U.S. for the past half-century. We build upon various FBC formats from the Form-Based Code Institute, the Smart Code, and various other Transect-based approaches.

We base our planning and coding on an organizing system called the Urban to Rural Transect. This approach recognizes that coding standards must vary according to their context along a rural to an urban continuum from the center to the edge of neighborhoods. It acknowledges the differences between the designs of town centers, neighborhoods, or rural dwellings, and that each of these contexts has distinct yet interrelated characters.

Conventional land-use codes unnecessarily separate development types based on their uses, while paying little attention to the physical form and placement of buildings. Land-use-based codes tend to create functional monocultures and districts of buildings that often do not relate to one another. This is seen across the U.S. in suburbs where segregated land-use zones necessitate driving longer distances between homes, shops, offices, and schools. Even different densities of housing are needlessly segregated, resulting in true economic and racial segregation.

FBCs define the general massing and disposition of buildings on their lots and in relationship to the public street front, resulting in more diverse mixes of uses and cohesive streetscapes and neighborhoods. FBCs concentrate more on the continuity of building size, mass and orientation, and less on whether they mix residences, shops, or workplaces. Suddenly people can walk more easily between their daily needs. And the buildings along their streets and throughout neighborhoods have a more pleasing disposition in relation to one another and, most importantly, in relation to the people who live in them.

FBCs produce more sustainable communities by making buildings flexible in their function. Buildings built for only one function become obsolete if that use becomes obsolete. Form-based buildings can change and be rehabbed from offices to residences to shops while maintaining a dignified appearance in their context.