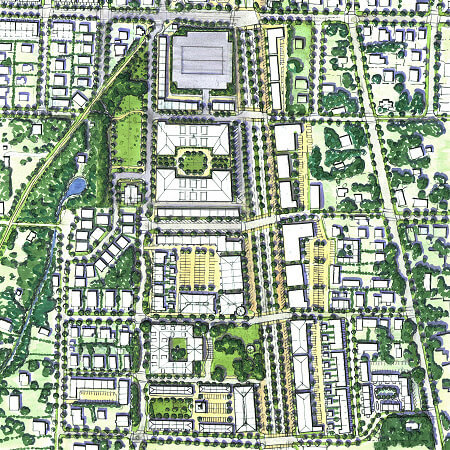 We design and master plan Transit-Oriented Developments (TOD) based on the successful precedents of generations of American and European cities and regions built on passenger rail. Historically New York City, Chicago, Washington, DC, and Philadelphia built some of the finest passenger rail networks in the U.S., with rail corridors forming webs that link towns and neighborhoods throughout their surrounding countryside. As urban strategists, we have established the macro scale of transit corridors, the locations of the stations, and the intricate design of the town centers along the way.

The next level of TOD is the walkable integration of surrounding neighborhoods with the station. Our work with communities to help knit together their circulation framework and promote compact development at the station center is vital to reinforce the functionality of the regional transit investment. At its essence, TOD is about making livable, walkable, diverse, and vital communities and regions that are reinforced by transit. Vibrant transit-supported centers are a foundation of a sustainable region.